The Stowers Doctrine: What is it, and How Does it Protect Me? 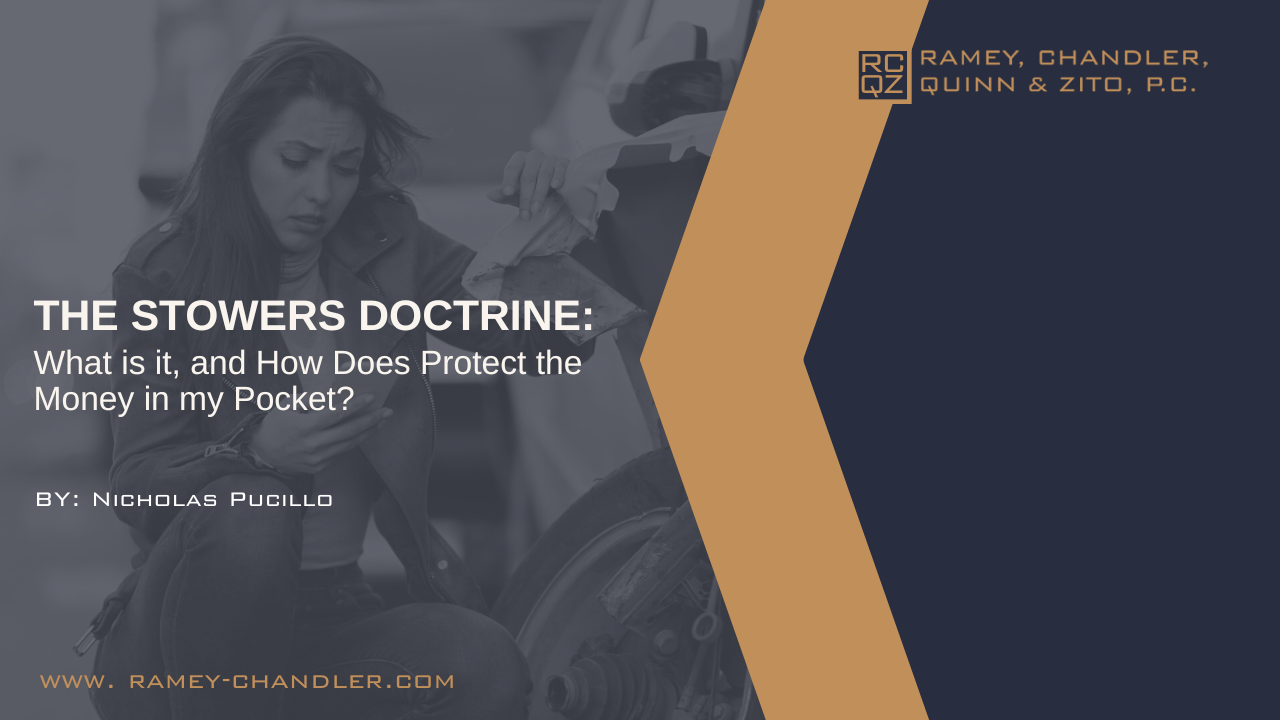 You have been involved in a motor vehicle accident, and the other driver has filed a lawsuit against you. Your insurer has informed you that it has retained the law firm of Ramey, Chandler, Quinn & Zito, P.C. to defend you in said lawsuit. Your primary concern is: how much is this going to cost me? The short answer: except in rare instances, most likely nothing! Your insurer will cover your attorneys’ fees and any settlement or judgment amount that falls within your current policy limits. However, what happens in the event that a judgment is awarded against you in excess of your current policy limits? In light of the Stowers doctrine, our firms works diligently alongside your insurer to make sure that never happens.

Under most modern insurance policies, an insurer holds sole control over the defense and settlement of a claim arising under the insurance policy. Thus, in your present situation, your insurance carrier owes you a duty to defend you against claims being brought by the other driver involved in your motor vehicle accident that fall within the scope of coverage under your policy of insurance. In terms of litigation, this duty includes selecting and hiring a qualified law firm to represent you in your lawsuit. In terms of settlement, and pursuant to the Stowers doctrine, this duty includes exercising care in assessing whether to accept or reject a settlement demand.

What is the Stowers Doctrine?

How Does the Stowers Doctrine Work in Practice?

Now, the Stowers doctrine only applies, triggering your insurance carrier’s duty to settle thereunder, where a demand to settle a claim covered by the insurance policy for an amount within policy limits is made. This is because your insurer has no duty to settle a claim not covered by the policy. In 1994, the Texas Supreme Court clarified the exact requirements that trigger an insurer’s duty under the Stowers doctrine as follows:

How this typically works is that the injured party or the injured party’s lawyer will send what we call a “Stowers demand” that must satisfy each of the above-referenced requirements. At that point, your insurer’s Stowers duty is “triggered.” Our firm will then work diligently in unity with your insurer to assess the injured party’s Stowers demand to assess whether the demand should be accepted or not. In some instances, the injured party’s Stowers demand may clearly not satisfy the requirements listed above, and your insurer may decide to reject it outright or respond with a more reasonable counteroffer. Such decisions are not typically made lightly, and the insurer typically makes sure to exercise due care with your best interests in mind. In other instances, where the injured party undoubtedly satisfies the requirements above, your insurer would likely decide to accept the settlement demand. Thus, under the right circumstances, the Stowers doctrine encourages the prompt settlement of claims being brought against you without you having to pay any money out of your own pockets and protects against the risk of a jury verdict and resulting judgment in excess of your policy limits. If the insurance carrier decides to reject the Stowers demand and that decision is later determined to have been unreasonable, then the insurer, rather than you, could be responsible to pay any part of the judgment in excess of your policy limits. The Stowers doctrine ultimately highlights the importance of the insurer, the insured (you), and counsel working together with your best interests in mind.

By accepting you will be accessing a service provided by a third-party external to https://ramey-chandler.com/